The boys had a couple days off of school for Semana Santa so we decided to take an impromptu trip to Bocas del Toro.  BC and I have been to Bocas two times before, but our last visit was in 2006 (over 12 years ago).  At that time it was just beginning to be discovered, and we knew it had probably grown a lot since then.  We were very curious to see how it had changed.

Bocas del Toro is an archipelago of island on the Caribbean side.  It’s known for it’s crystal blue waters, jungle environment, wild animals, reggaeton, and surfing.  Bocas is about a 7 hour drive from Pedasi.  The last quarter is super windy over the mountains, and both the boys felt car sick.  It was a miserable two hours as they cried and screamed.  BC apparently doesn’t believe in stopping when people are car sick, he just puts powers through and tries to get there as fast as possible.  Once you arrive in Almirante, it’s a crazy experience with locals on bikes crowding your car screaming, “Bocas, Bocas!” and wanting to show you the way.  We emptied out our car, parked it in a secure lot, and loaded onto one of the taxis to Bocas.  The water taxis drop you off from the main island (Isla Colon), and from there we took a private charter to Bastimentos, which is the largest island.

We rented a villa in the Red Frog Resort on Bastimentos (a large well-known collection of vacation villas that was just starting construction when we visited in 2006).  It was the perfect place to stay (although expensive)- we had our own private house with a pool, we could get around the resort using our rented golf cart, and we had access to the resorts beach club and concierge service.  Apparently all we had to do was rent the golf cart because as we drove around in that, AJC kept screaming, “This is the best day ever!” We spent the first day just exploring the resort grounds and playing at the beach club before cooking dinner for ourselves at the house. 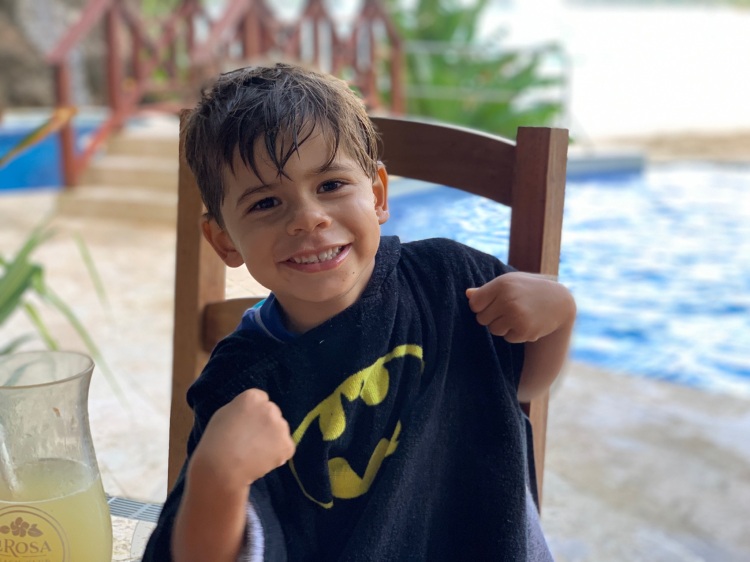 I had two main goals for our travels in Bocas- tour a chocolate farm and see dolphins.  On our first full day, we checked off the chocolate farm.  There are a few different options for chocolate farms, but I was surprised to find some had age limits of no kids under 5.  We were excited to find Up in the Hill which welcomed family visits.  To get there we took a water taxi to the other side of Batimentos and climbed up a long trail to the top of the hill (hence the name).  They said the hike would take 15 minutes.  For us it was probably double with the kids, but it was doable and the trail was clearly defined.  It is the humid jungle though, so buy the time we arrived, I was drenched in sweat.  We couldn’t wait to order one of their juices.  This family was so welcoming.  They brought out toys right away for our kids to play with while we waited.  They also had boys who were pure jungle kids so they didn’t mind our wild offspring.  The family was so inspiring.  The bought the property around 20 years ago when it had been completely deforested for a cattle ranch. They have thoughtfully reforested and have seen a complete reemergence of the wild habitat- butterflies and red frogs have returned, and they have a healthy crop of many different types of fruits, vegetables, flora, and fauna.  The dad and son gave us a tour of the property explaining the different trees and all of the medicinal properties of the edible plants.  In addition to plants, we saw red, orange, and yellow frogs and a sloth clinging to the top of a tree.  The tour culminated in “snacks” which was more of a feast made completely from their produce.  During the snacks, he also demonstrated how they produced cocoa and coconut oil and milk.  The family also uses their crops to produce a line of cosmetic/skin care products.  They truly believe that the earth provides all the medicine the body needs, and they are making great efforts to contribute to the growth and sustainability of the environment.  This is a must-do for any family traveling in Bocas.

Our second day was all about check list item number two- see dolphins!  In the past, I had done a catamaran tour of Bocas that included Dolphin Bay where I saw dolphins literally jumping out of the water and doing flips like a real life Sea World show.  I really wanted this experience for the kids, but I had heard that a lot of the dolphins had moved on due to the tourist traffic.  Also, most of the catamaran tours were all day experiences which I thought might be too much for the kids.  Instead we chartered a private panga through the resort.  The guide was awesome because he timed each location when no one was there and we left just as all the tourist boats started to roll in.  The planned schedule was to pass over an area with lots of starfish, head to look for dolphins, go on to Zapatilla Island, and then eat lunch at an over the sea restaurant.  On our first pass through we didn’t see any dolphins.  I was disappointed, but I understood that we just might not have that experience.  Zapatilla Island was a total Caribbean paradise- turquoise blue waters, sugar sand, and totally deserted.  We played for about an hour and then boat after boat after boat filled with visitors started to arrive.  Because it was Easter weekend, it was a popular day destination.  We left to head to the restaurant.  At the restaurant, the captain showed the kids how to throw their fish/seafood scrapes into the water so they could watch with delight as the fish swarmed for them.  We were just about to reach Red Frog marina, when all of a sudden, our captain spotted dolphins.  There were three dolphins playing in the bay.  We didn’t see an flips, but we got to watch for a few minutes as they swam, dived, and played with each other.  It was the first time that our kids got to see dolphins in person, and it was such a magical experience.

We came home to relax after our boat ride, and look who we spotted right outside our balcony.  There were two sloths both relaxing on the trees right by our house.  Because our house was elevated, we were almost the exact same level as them and were able to see them perfectly.  One was actually pretty spunky and kept climbing up and down the trees. 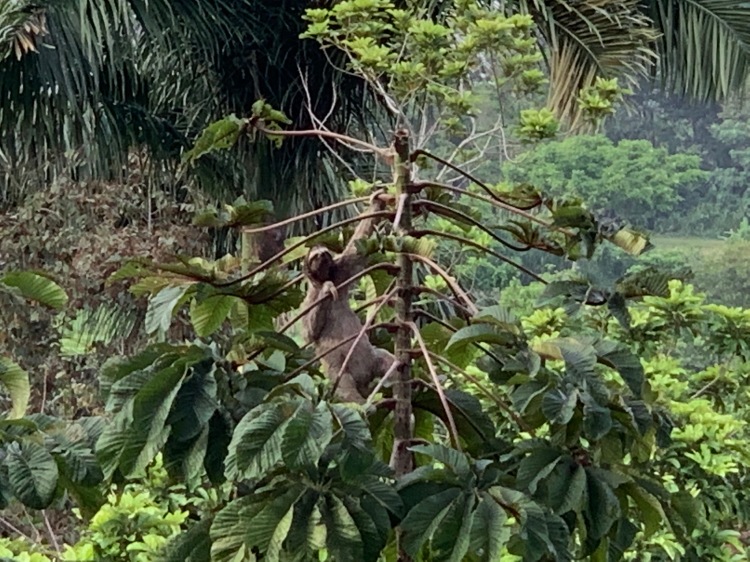 We ate dinner that night at the Point which is a pizza place right on the beach at Red Frog.  The kids loved running and playing on the beach while we waited for our food.

Since we had already checked off my two priorities, Brian got to pick the activity for the next day.  We took a water taxi to Isla Colon (the main island), and we rented a golf cart to explore the island.  We were curious to see how much it had changed in over 12 years.  When we visited the first time in 2002, we stayed out at Bluff Beach which was completely empty except for our little ecolodge.  Now the road out to Bluff is smattered with B&B’s, ecolodges, and nice resorts.  We ate lunch just before Bluff Beach at Paki Point (across from Paunch Beach).  The vibe was chill, and the food was delicious.  It is a little oasis outside the main town.  The town has also grown exponentially.  There are multiple streets filled with restaurants, bars, and shops.  Everywhere you see backpackers and some family tourists.  It seems that the whole town is now focused on tourism.  We also drove out to Boca del Drago which is supposed to be a beautiful beach with starfish, but after a long drive, we arrived at a boat port and saw multiple boats filling with tourists.  We decided to loose the crowd and headed back into town and ate dinner at the Bocas Brewery.  This place was a total pleasant surprise.  Not only was the beer really good, but the food was great too.  Although we had fun, we didn’t love Isla Colon. It’s much more congested and the beaches either seem dirty or the waves are way too big for kids.  It was fun to check out, but I’m really glad we stayed at Red Frog so we were able to escape the crowds.

We headed home on Monday.  Again the kids got sick on the ride out of Bocas- luckily I had a ziplock bag for AJC to puke in.  The way was long, and we were happy to get home, but we were really happy we went.  The boys are already asking to go back.  They also couldn’t wait to go to school to tell their friends about all the animals that they saw.  Hopefully it won’t take us another 12 years to return!