We have been blessed here to make such good friends with other families in the international community.  One family we have particularly bonded with because they have small boys as well.  Our boys play so well so we get together often.  Unfortunately, they had only planned to stay in Pedasi a year, and of course, that year went fast.  They are scheduled to leave at the end of March, and we are all heartbroken about their move.  As a last hurrah, we decided to all travel together to Boquete and rent a house for a weekend of fun.

Boquete is a beautiful town in the volcanic, mountain region of Panama.  The weather is a bit cooler, the soil is rich, and the landscape is full of orchids, tropical plants, and wildlife.  There is just something majestic about Boquete.  We stayed in a large house on a coffee plantation.  The kids loved exploring the grounds together.  We filled each day by playing, hiking, and enjoying the fruits of the region like strawberry desserts, honey, coffee, and chocolate.  Somehow, even though we played non-stop, the kids still had boundless amounts of energy.  Luckily the adults were able to escape and leave the kids with a babysitter for one night and get a much needed double date night.  Through the trip, we grew even more bonded with this special family.

It is a 5 hour drive to get from Pedasi to Boquete.  The kids were bursting with energy when we arrived.  We had lunch at Sugar and Spice, the cutest bakery with salads and sandwiches.  (Boquete is also nice because even though it is still quaint, it is much more developed than Pedasi, so we had so many shop and restaurant options).  Then out of pure luck we happened upon the Festival of Flowers that we had no idea was happening.  The kids loved running around the gardens and playing within the fantasy land. 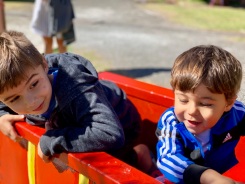 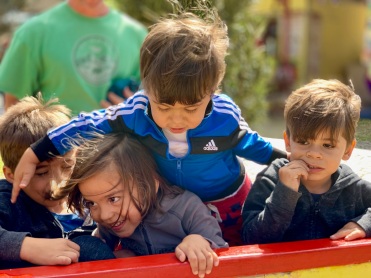 We then arrived at the house.  While the moms unpacked, the dads took the kids outside to “hunt jaguars.”  The yard was huge and filled with coffee trees and berry plants.  Of course PJC ate every berry off the bushes, ripe or not.  The kids also found a tree house platform that may or may not have been that safe.  Just hanging out at the house was one of the joys of traveling together. 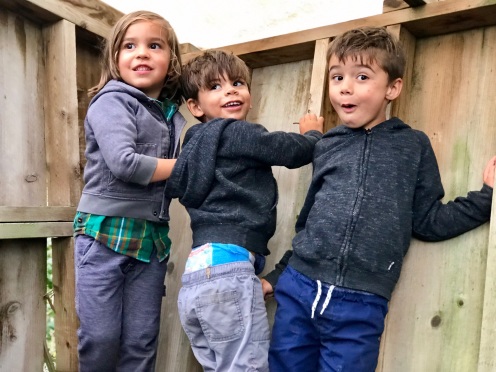 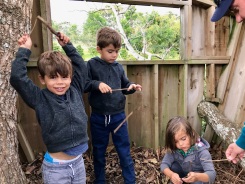 The first day, we started with the adventure of hiking the Pipeline Trail.  Most people rated this as an easy trek, but with four kids under the age of 6 and no baby carriers, this was a challenge for us.  They say it takes about two hours, but it was probably double for us.  The trail is beautiful, into the forest and up the mountain.  The scenery is lush, but we didn’t spot any wildlife (could have been the loudness of the animals we were traveling with).  There is also a 1000 year old tree in the middle of the hike (which PJC peed on of course).  PJC also at one point walked up to a huge Jurassic Park looking leaf and took a bite right out of the middle.  He then started screaming because it hurt his tongue.  That child is untamable.  The trail is clear to follow, but there are a few tricky bridges.  It is supposed to end in a waterfall, but only the dads made it that far because the last little bit was all boulders.  That’s okay, it was only a small trickle of water since it’s the dry season.  All in all, the kids did amazing and AJC actually hiked the whole thing without being carried.  They loved exploring all the forest had to offer, and they were proud of themselves for being such warriors. 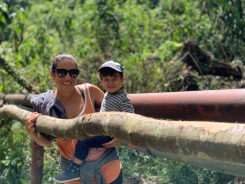 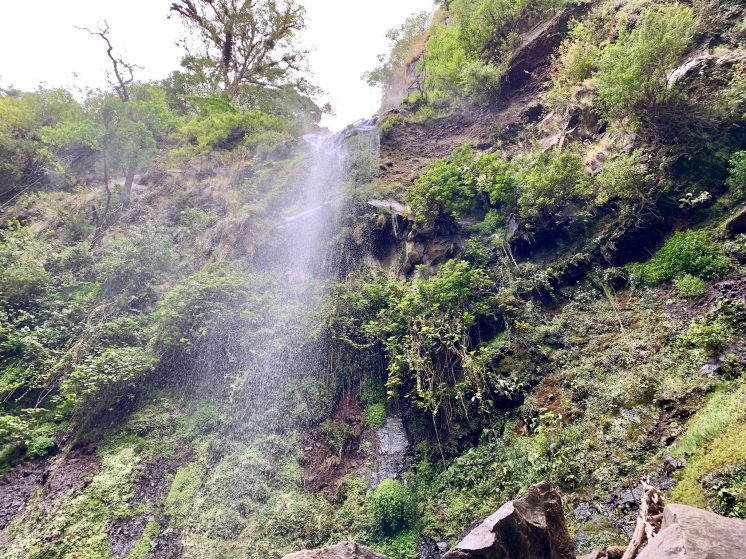 The next day, we took the kids to the Boquete Bees.  We missed the bee tour, but we were able to walk through the butterfly house and then taste several different types of honey.  The kids were in heaven (and they were serious critics), and I ended up dropping several dollars on honey as souvenirs. 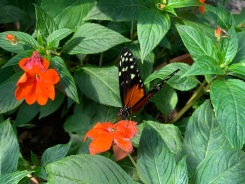 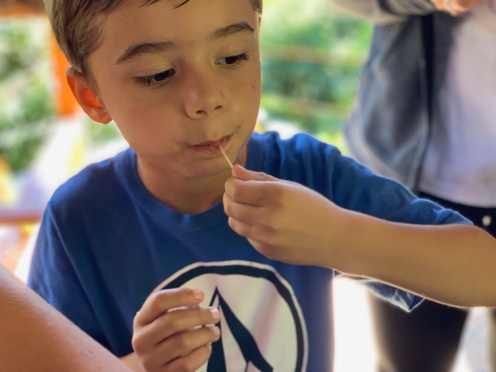 We also traveled to Jungla that day which is a rescue organization for local animals.  Were were able to learn more about the animals and even feed some of them.  There were spider monkeys, raccoons, owls, tropical birds, ponies, and goats.  My kids loved feeding the monkeys, but were not about to get in the bird area (they must take after their grandfather).  They watched their brave friends let the birds sit on their arms and eat out of their hands.  We were also able to see where they release the animals back into the wild when they are rehabilitated.

That night, the adults actually got a night out.  We celebrated with beers at Boquete Brewing Company and dinner at Retrogusto.  The next day, we woke up and hit the Tuesday Farmer’s Market on our way out of town.  Everyone had raved out it, but it was a bit too crowded for us.  We headed home, so thankful for the memories we were able to make with our good friends in such a special place.