When making the decision to move to Panama, our biggest concern was what to do about school for the kids.  After our move, it has proved to be our biggest challenge.  AJC was supposed to start Kindergarten in August (right when we arrived), so figuring out a school solution was definitely first on the priority list.

I have heard from many expats that move to Latin America that school is often their biggest concern.  Many choose to homeschool.  That isn’t really an option for us because we both need to be focused on starting our business.  Also, the kids learn the worst from us.  I’m not that creative, nor am I patient, and they listen and behave so much better for their teachers.  So we knew that we had to find a solution beside homeschooling.  The first challenge is that because our town is relatively remote and small, there is no international school.  They are building one that is supposedly going to be open in March.  In the meantime, the options are the public school or doing our own thing.  Many of the expats here seem to be doing their own thing and everyone has different goals and needs.  The second challenge is that the school year is different that in the States.  It runs March to December, meaning that AJC would have to jump into Kinder when it was 2/3’s over or be held back.  The third challenge is that many of the schooling options outside of the public school are in English.  The fourth challenge is that we plan on returning to the States in about three year so we need to make sure that the boys are ready to transition to the academic expectations in the U.S. Schools at that time.

Our goals were clear.  First, it is important to us that the boys become immersed in the language and the culture.  We want them to be bilingual by the time they leave Panama.  Second, we want them to keep on pace with the academic standards of their age/grade equivalency in the US so that they will not struggle when we move back.

For PJC, because he was so young, it was relatively an easy decision.  There is a public “nursery school” that is free. While it would serve to immerse him in the language, they really don’t do anything academic.  They have a lot of screen time- basically it’s glorified babysitting.  We received a recommendation from another expat about a teacher running a morning Learning Center for kids ages 2-4.  It is in English which was not our preference.  However, the teacher is super warm, creative, structured and experienced in education and child development.  He LOVES it.  He has never loved school so much.  He is excited to go every day, and we love seeing all that he is learning and creating.  To address his language immersion, he spends the afternoons with a local nanny.  She lives very humbly, but she seems to really love on the kids.  We also just hired a teacher to work with him one on one in the afternoons to teach him Spanish.  Here are some pics of him having fun at the Learning Center. 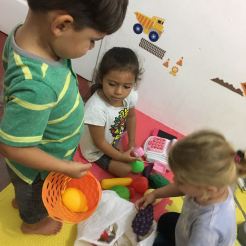 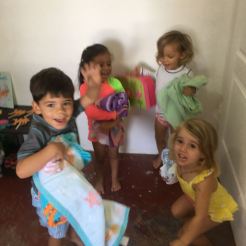 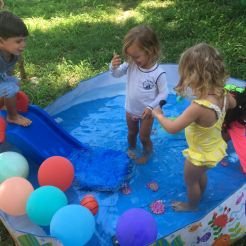 Figuring out schooling for AJC has been our largest source of anxiety.  Their really weren’t any other options for Kindergarten except for the public school.  We also wanted to place him in the public school to immerse him in the language and the culture.  When we went to enroll him in the public school, they were very concerned about placing him in kindergarten since it was so far into their school year.  We knew this might be an issue, so while still in the States we had hired a private teacher to work with him every Friday to equip him with Kindergarten skills and practice Spanish with him.  His preschool had also been pretty academic so I was confident that he was on par academically and developmentally with their Kinder students.  However, we knew the language would be a big barrier for him.  We advocated to place him in Kinder and they eventually agreed.  BC and I went to visit the classroom, and I was less than thrilled.  It was in a small dark room with no windows.  The kids wear uniforms and sit in desks.  No one could articulate to me what they are learning or what they do all day.  I cried on the way home.  It just wasn’t the kindergarten environment that I wanted for him.  AJC has had a lot of challenges with his development, sensory issues, and anxiety.  We have worked really hard to help him progress- speech therapy, occupational therapy, tutoring, martial arts, swim lessons.  He has made amazing leaps and bounds in the past two years.  I wanted a kinder environment that was going foster a love of learning and help him feel really comfortable with school.  This was not it, but we felt we really had no other option and we felt it was the best way to encourage his language development.  He started school a week and a half ago.  Every day has been a struggle.  It’s only a half day kinder, but the first day they called us to pick him up after two hours because he cried the whole time.  Miraculously he went the second day and stayed the whole time and has continued to go, but every morning he is upset and we have to drag him in.  He hates the uniforms, he hates that everyone speaks Spanish and he doesn’t understand, he hates that the nanny picks him up instead of me, the list goes on and on. The other part that is worrisome is that we have no idea what is happening while he is there.  We ask him tons of questions about his day, and he can’t articulate anything, so it is a total enigma what he does while at school.  I’m pretty sure he just mopes and is silent the entire time.  Also, because his anxiety is at peak level, his behavior has been unbearable at home.  It is so hard to support him and be extremely patient when his behavior makes it really hard to like him right now (just being honest).

It’s only been two weeks so we are hoping it gets better.  The school year ends in December so we are trying to persevere until then.  In March, there are plans to open an international school.  It’s not ideal either as it’s taught primarily in English (with Spanish as a subject).  However, we might look at transferring the boys there depending on how things progress and if it seems like a better environment.  In the meantime, in the afternoons, we have AJC working with a private teacher to help keep him up to U.S. standards (since kinder in the U.S. has gotten ridiculously advanced).  It’s the same teacher that runs PJC’s Learning Center.  AJC has been enjoying his time with her. 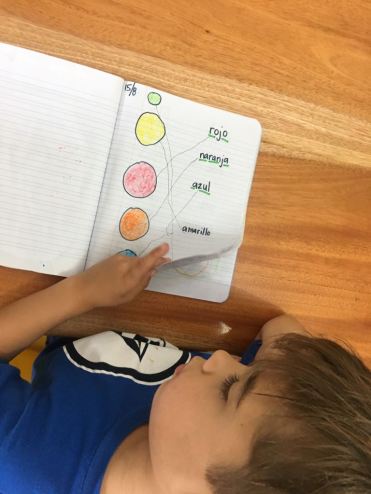 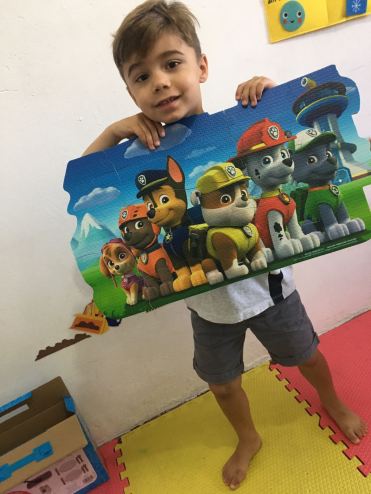 Everyone here from expats to locals has different needs and goals for their kids.  Our goals are pretty specific since we are only here temporarily, so I understand that there is not a perfect solution to meet our needs.  At this time, we are just trying to make it work and hoping for the best outcome.